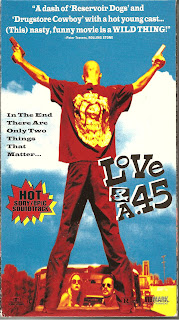 Quentin Tarantino Rip-Off Movie (Please click the link to read my review of another obvious QT rip-off, For a Few Lousy Dollars)


Blurb From the VHS Jacket: "In the tradition of 'Pulp Fiction', 'True Romance' and 'Reservoir Dogs', LOVE AND A .45 is a cutting edget story of two fugitive lovers on a fast and furious run for freedom. With a pounding soundtrack and brilliant performances from a sexy young cast, this raw and turbulent film shows the talents of a new force in filmmaking."


What Did I Learn?: 1) if your girlfriend vows that she would follow you all the way to Oklahoma, she’s a keeper. 2) There are only two things you need to get by on Planet Earth: love, and a .45.


Really?: 1) So wait, Watty and Starlene are wanted by the cops for murder, and they take the time get married by a Justice of the Peace? Aside from leaving clues about their presence, and where they’re going, isn’t it up to the judge to file their request? And why would he do that after Watty and Starlene bound and gag him afterwards? 2) Isn’t Watty taking a huge risk by tempting the convenience store clerk with a loaded firearm? 3) I had a bit  of trouble believing Dinosaur Bob and Creepy Cody could torture Billy Mack Black with a tattoo gun, and he would then willingly join their search for Watty after they shoot him up with drugs. 4) I’m still shaking my that scene in the diner when Watty disarms Billy Mack and stabs him in the neck with a fork.


Rating: Everything about Love and a .45 is atrocious: the acting, dialogue, storyline and action scenes are all sub-par and unwatchable. In fact, I gave up after an hour or so of self-imposed torture. I cannot recommend this movie. 2/10 stars.


Would It Work For a Bad Movie Night? Absolutely! There’s actually a scene when Dinosaur Bob sniffs Watty’s hand to determine if he’s been, um...enjoying conjugal relations with a lady. Come on – if that isn't crowd-pleasing comedic gold, what is?