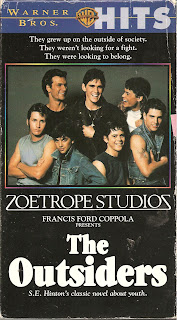 
Blurb From the VHS Jacket: "In 1966 Tulsa, teenagers come in two ways. If you're a 'soc', you've got money, cars, a future. But if you're a 'greaser', you're an outsider with nothing but your friends... and a dream that someday you'll finally belong."


What Did I Learn?: If you save a bunch of little kids from an abandoned, burning church, the cops will promptly forget all about the pesky murder investigation.


Really?: 1) See “What Did I Learn?” (at the very least, it was never really mentioned again, afterwards). 2) These kids seem awfully self-aware and philosophical for a bunch of teenagers from the wrong side of town.


Rating: The Outsiders is a warm, compelling and generally well-acted drama about troubled youth and class tensions in the 1950s. The film boasts a murderer’s row of cast members: Ralph Macchio (he provides an outstanding performance as one of the greasers – it’s a shame his career stalled after the Karate Kid movies, because he obviously had some talent) , Lane, Dillon, C. Thomas Howell, Tom Cruise, Emilio Estevez, and Patrick Swayze. The Outsiders is a good movie, although there are too many unnecessary characters, the story becomes a bit predictable near the end,  a few of the scenes look incredibly over-stylized, and Stevie Wonder’s “Stay Gold” is a lovely song but doesn’t really fit the overall milieu. 8/10 stars.