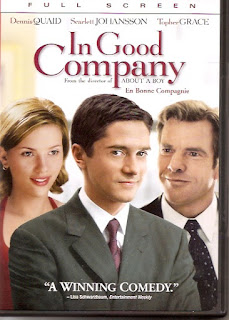 Synopsis: It’s basically two hours of Topher Grace finding creative ways to drive Dennis Quaid batshit crazy until the old guy finally snaps.
Blurb From the DVD Jacket: “Dan Foreman (Dennis Quaid) is a loving husband, caring father and star ad executive. But now, life is putting him through the ultimate test.”
What Did I Learn?: The secret to a good marriage is the following: “You just pick the right one to be in the foxhole with, and then when you're outside of the foxhole you keep your dick in your pants.”
You Might Like This Movie If: You really want to see a media tycoon struggle to answer some tough questions.
Really?: 1) I’m pretty sure that “we’re letting you go” is a commonly-understood euphemism for “you’re fired.” 2) Wait…Dan punches his boss in a crowded restaurant, and then embarrasses the big cheese (Malcolm McDowell in a nice cameo as Teddy K) with some very embarrassing (albeit valid) questions at a company pep rally, and he somehow has a job (and isn’t in jail) at the end of the day? 3) So, the company gets bought out, and everything goes back to the way it was before all of the cutbacks? That’s convenient.
Rating: In Good Company is a funny and charming film that somehow manages to work as both a romantic comedy and as a satire of corporate culture. While the story is told from Dan’s perspective, Carter (Grace) is portrayed sympathetically, and it’s hard not to like the guy even when he’s forced to terminate most of the magazine’s workforce. My only complaint is the movie’s third act, which is a bit hard to swallow (see: “Really?”) 7.5/10 stars.