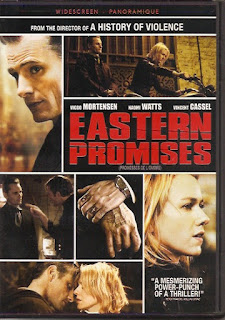 Hmm….I could have reviewed this for my tribute to British gangster films.
Synopsis: The Russian mob is baaaaaaad news.
Blurb From the DVD Jacket: “Viggo Mortensen and Academy Award nominee Naomi Watts star in this electrifying thriller from critically acclaimed director David Cronenberg (A History of Violence).”
What Did I Learn?: Apparently, the City of London consists entirely of Russians and Chechens.
You Might Like This Movie If: You enjoy hearing stories about the Russian mafia.
Really?: 1) Wait, Anna (Watts) only learns about the attack on Nikolai (Mortensen) because some orderlies happen to wheel him past her as she’s walking through her hospital? Boy, that’s a coinky-dink! 2) If I discovered the local mob boss raped a young girl, I wouldn’t drive over to his place of business just to yell obscenities at his henchmen. 3) Speaking of the boss (Armin Mueller-Stahl), doesn’t he have more important things to do than taste the borscht, and organize birthday parties at a Russian restaurant? 4) Ok, I realize the demographics of London have certainly changed, but it’s strange that this movie takes place in London, and yet aside from Anna’s mom, we don’t meet any Brits.
Rating: If you ever wanted to learn more about post-Soviet gangsters, Eastern Promises is a good place to start. The film has a creepy, and suspenseful ambiance - lots of dimly-lit rooms and long shadows - and I really liked the interplay between the Anna the idealist and Nikolai, the strangely sympathetic criminal. You never really know where he stands until the very end, which makes him interesting. The biggest problem with Eastern Promises, however, is that it’s nearly all ambiance and build-up, so it doesn’t really go anywhere. The ending is a bit of a disappointment. 7/10 stars.