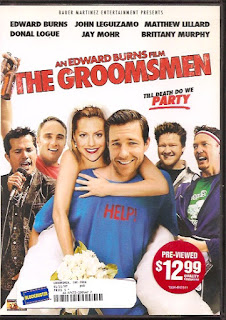 Synopsis: Loveable goofballs party hearty and get into trouble right before a wedding. Wait, that’s the Synopsis for The Hangover. Um…. Old friends reminisce, and discuss big thoughts about life and relationships before one of them ties the knot. No, that’s The Wood. Ok… Edward Burns and his blue collar, Irish Catholic buddies date women who look like underwear models, and worry about getting serious. No, that’s She's the One and The Brothers McMullen.
Blurb From the DVD Jacket: “The countdown to Paulie’s (Edward Burns) wedding to his beautiful and pregnant girlfriend, Sue (Brittany Murphy), reunites Paulie’s childhood pals for a week-long raucous bachelor party filled with laughs at every turn.”
What Did I Learn?: “if you have one kid, you lose a little bit of your life, a little free time, a little bit of your freedom. But you have two kids, your life is over.”
You Might Like This Movie If: You know that wedding jitters aren't an uncommon occurrence.
Really?: I can’t believe Burns edited out every scene of John Mahoney (best known as Martin Crane on Frasier) as Paulie’s father, but kept at least ten or fifteen minutes of God-awful songs performed by the main characters.
Rating: The Groomsmen is a warm, funny, and very believable character-driven comedy with likeable (albeit a bit whiny) characters and some nice moments. My only complaint would be that I didn’t need to hear so much terrible music, and Burns should have at least considered eliminating the garage band sub-plot from the script. 8/10 stars.