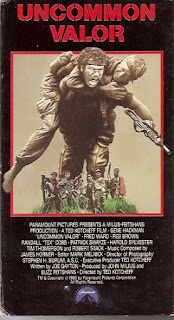 Coming Back From Vietnam Movie #10 (please click the links to read my reviews of two other Ted Kotcheff films: North Dallas Forty, and Switching Channels)
Synopsis: It’s like a 105-minute episode of The A-Team, except our heroes use four-letter words, and people actually get iced when the plastique explodes.
Blurb From the VHS Jacket: “Gene Hackman portrays Colonel Jason Rhodes, a man obsessed, in this powerful, action-packed adventure.”
What Did I Learn?: 1) You don’t ever quit, not when it’s for real! 2) Most human problems can be solved by an appropriate charge of high explosives.
You Might Like This Movie If: You really want to watch somebody beat the crap out of Patrick Swayze.
Really?: 1) Funny how the only team members who don’t return from the mission are the ones without wives and families waiting for them back home. 2) Am I wrong in thinking it highly unlikely the Vietnamese/Laotians would keep (and feed) American POWs so long after the end of the war? I mean, in this movie, they’re so emaciated that they probably wouldn’t be much use as farm labour, and returning them after so many years would be a public relations disaster for everyone involved. 3) So, wait - the men get their weapons impounded by Thai officials (tipped off by the CIA), so they use their bonus money to buy WWII-era guns, and attempt the mission on the cheap? Wouldn’t it be a much better idea to contact Macgregor for more dough?
Rating: Uncommon Valor owes a lot to The Dirty Dozen, as well as other mercenary-themed films such as The Wild Geese and The Dogs of War, but it’s also a highly-compelling action-thriller with some nice performances from an impressive cast. This might be an overly-generous review, but Uncommon Valor is one of my favourite go-to films, and it’s definitely worth checking out if you haven’t already seen it on television. Highly recommended. 9/10 stars.