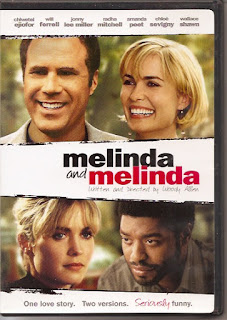 Please click the links to read my reviews of a few other Woody Allen movies, including Manhattan Murder Mystery, Deconstructing Harry, Radio Days, Hollywood Ending, Sweet and Lowdown, and Bullets Over Broadway.
Synopsis: Have you ever wanted to watch the same dreadfully dull story involving rich-and-pretentious New Yorkers unfold not once, but twice? Have I got a movie for you!
Blurb From the DVD Jacket: “Legendary writer/director Woody Allen tells a woman’s story twice - once as a comedy, once as a drama.”
What Did I Learn?: 1) Apparently, men find women in casual clothing to be much sexier than women in formal or business attire. 2) Everybody who is anybody has a place in the Hamptons. 3) Living is messy. 4) Life has a malicious way of dealing with great potential. 5) Life is all networking. 6) The essence of life isn’t tragic; it’s comic. 7) Life is manageable enough if you keep your hopes modest. The minute you allow yourself sweet dreams you run the risk of them crashing down.
You Might Like This Movie If: You want to watch famous New Yorkers engage in a pointless, and age-old debate that can never really be settled.
Really?: So, the entire premise of this movie is a friendly debate between two educated playwrights on the superiority of tragedy over comedy, and vice-versa? Isn’t that akin to arguing that the accelerator on a car is more important than its brakes?
Rating: I wanted to like Melinda and Melinda, yet after an hour of Will Ferrell’s distracting Woody Allen impression, I desperately wished for this turkey to end. None of the characters presented are even remotely likeable, let alone interesting, and the “comedy” presented really falls flat. I cannot recommend this movie. 4/10 stars.