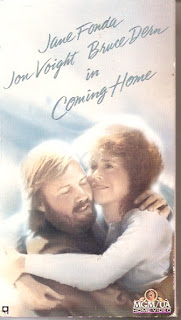 Coming Back From Vietnam Movie #5
Synopsis: It’s basically Born on the Fourth of July, except Ron Kovic ruins a marriage.
Blurb From the VHS Jacket: “Perhaps the most powerful and moving film ever made about the shattering aftermath of the Vietnam War, Coming Home earned eight Academy Award nominations and three Oscars: Best Actress for Jane Fonda’s ‘unforgettable portrait’ (Judith Crist), Best Actor for Jon Voight’s ‘dazzling performance’ (Rex Reed) and Best Screenplay.”
What Did I Learn?: 1) Tiger balm makes you feel cool. 2) The Marine Corps builds body, mind and spirit. 3) Gents, if you’ve been away from your wife for a long time, and she fixes you an intimate dinner-and-cocktails welcome home get-together with a couple of close friends, it’s a really bad idea to invite a few of your drinking buddies over for free booze that night.
You Might Like This Movie If: You're in the mood to watch a marriage meltdown.
Really?: Um, isn’t Bruce Dern’s hair a little long for a Marine Captain?
Rating: Coming Home is a powerful anti-war drama (it’s also a searing indictment of the overcrowded, and underfunded V.A. hospitals that treated Vietnam vets) that earned three Oscars: Best Actress for Fonda, Best Actor for Voight, and Best Screenplay. Both leads deliver strong performances, but in my opinion, Dern steals the movie with his memorable portrayal of a decent-yet-troubled officer who can’t come to grips with the savagery he saw in combat. Oh, the film also boasts a kick-ass 1960s soundtrack. Highly recommended. 9/10 stars.