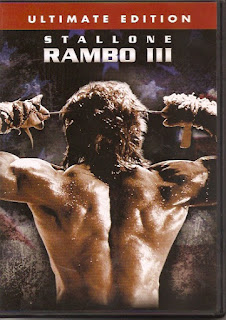 Coming Back From Vietnam Movie #4
Synopsis: Rambo teams up with the Taliban to expel the infidel invaders from Afghanistan. Wait, WTF?
Blurb From the DVD Jacket: “This intense, heart-pounding adventure boasts unrelenting action and suspense from start to finish.”
What Did I Learn?: 1) Rambo has fired a few shots, and he’s not a tourist. 2) God has mercy; Rambo doesn’t. 3) “May God deliver us from the venom of the Cobra, teeth of the tiger, and the vengeance of the Afghan” can be loosely translated to mean ‘Afghans don’t take any shit.’
You Might Like This Movie If: You know the Soviets made a really, really big mistake when they got bogged down in Afghanistan. Oh, wait…
Really?: 1) So, Rambo is extremely talented at Afghan polo, even though he’s never once played it, and he’s up against men who have spent their entire lives on horseback? 2) Hey, what happened to Kurtwood Smith’s character? He’s onscreen for maybe ten minutes, and then disappears….and he has fourth billing! 3) Wait - Colonel Zaysen (Marc de Jonge) spends most of the movie torturing Trautman (Richard Crenna), and then the two aren’t given another face-to-face encounter after Trautman escapes. I’m pretty sure viewers want to see Trautman beat the crap out of Zaysen in hand-to-hand combat, not blow up his helicopter gunship.
Rating: Much like The Living Daylights, Rambo III seems more than a little dated in the post-Cold War / post-9/11 world, but that’s really the beginning of its problems. The film is simplistic, cartoonish, and predictable. And while Rambo III has important things to say about the Red Army’s conduct during the 1979-89 war in Afghanistan, its dialogue often descends into outright editorializing. I cannot recommend this movie. 4.5/10 stars.
Would it Work For a Bad Movie Night?: Maybe. Take a drink any time any time Rambo kills somebody, or does something cool with that badass knife.