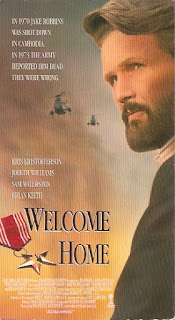 Coming Back From Vietnam Movie #6
Synopsis: It’s basically The Return of Martin Guerre with a few minutes from Missing in Action.
Blurb From the VHS Jacket: “In 1970, Air Force pilot Jake Robbins’ plane was shot down over Cambodia. The US Military identified a body as Jake’s and sent it home for burial. Ever since, Jake’s family as struggled to rebuild their lives without him… The Army would like Jake Robbins to remain a dead hero. But now, 17 years after his family buried him in a hero’s grave, Jake Robbins shows up on their doorstep - alive. Welcome Home.
What Did I Learn?: Apparently, the official U.S. Air Force policy, when confronted with a former Prisoner of War who was previously presumed to be killed in action, is to provide him with phony identification papers and a duffel bag full of cash, and tell him to keep a low profile.
You Might Like This Movie If: You know that you won't always receive a warm reception after coming back from the dead.
Really?: 1) The first 15 minutes of the movie are a bit difficult to swallow. Jake is comatose from a high fever in Thailand, yet he wakes up in a V.A. hospital in the US. How did they know he was American, let alone an Air Force pilot, and why would American officials take him back to the US without at least vetting him? 2) The offscreen death of Jake’s Cambodian wife is rather convenient, isn’t it? 3) See: “What Did I Learn?” (Seriously, how long do the military brass think Jake can live in his hometown without creating a media frenzy?) 4) So, Jake is supposed to be what, 35 years old? Wasn't Kris Kristopherson a little past his prime for that role in the late 1980s?
Rating: I have to give Welcome Home a bit of a mixed review. On the one hand, I was genuinely moved by the quiet dignity of Kristopherson’s portrayal of Jake Robbins, and it’s tough not to feel a lump in one’s throat during the scene when he meets his father again after such a long absence. On the other hand, the movie’s script has a few obvious problems (see: “Really?” and “What Did I Learn?”), but its biggest is that it doesn’t really know where to go after Jake reunites with his long-lost wife, and meets her new family. I also have to deduct at least one star for an absolutely awful theme song performed by Willie Nelson, and co-written by Henry Mancini. 6.5/10 stars.