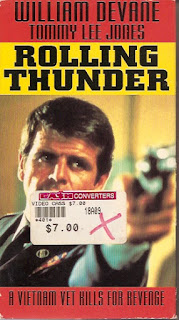 Coming Back From Vietnam Movie # 9 (Click the link to read my review of Space Cowboys, another film that starred William Devane and Tommy Lee Jones).
Synopsis: Bad dudes mess with the wrong guy, who now wants payback. That's right - it would have been perfect for my 2011 tribute to Revenge movies.
Blurb From the VHS Jacket: “When Major Charles Rane (William Devane) comes home to Texas after 8 years in a POW camp, he is given a true hero’s welcome - and a couple of things he hadn’t counted on.”
What Did I Learn?: 1) Gents, if a band of brigands threaten to shove your hand into a garburator if you don’t hand over a bag of silver dollars, give them the bag! 2) “You learn to love the rope. That's how you beat 'em. That's how you beat people who torture you. You learn to love 'em. Then they don't know you're beatin' ‘em."
You Might Like This Movie If: You're in the mood to watch trained soldiers dish out some punishment to the bad guys.
Really?: 1) Ok, I realize that Fat Ed, Texan, Automatic Slim and Lopez aren’t exactly the sharpest tools in the shed, but wouldn’t their big plan - assault and rob a local hero who was awarded a few prizes on television - likely result in a huge law enforcement backlash? Wouldn’t it be far simpler (and less risky) to just knock over a liquor store? 2) Gee, Dabney Coleman isn’t given much to do as Rane’s psychologist, is he?
Rating: Written by Paul Schrader, Rolling Thunder is a worthy companion to Taxi Driver, his other 1970s film about a troubled Vietnam vet who goes off on a violent rampage. Rolling Thunder is gritty, and rather disturbing at times, but it’s also a highly-entertaining action-thriller. 8/10 stars.