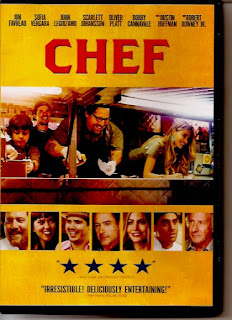 Please click the link to read my review of another film about the love of good food, Big Night.
Synopsis: It’s basically a very, very upbeat version of The Van, as well as a two-hour ad for Twitter.
Blurb From the DVD Jacket: “Jon Favreau (writer, director, producer) leads a hilarious all-star cast including Sofia Vergara, Scarlett Johansson, John Leguizamo, Bobby Cannavale, Dustin Hoffman, Oliver Platt, Robert Downey Jr. and young actor Emjay Anthony in this deliciously entertaining comedy about starting from scratch.”
What Did I Learn?: 1) Don’t EVER attempt to send a private message via Twitter. 2) Apparently, social media marketing is super-easy, and can be mastered by small children.
You Might Like This Movie If: You know it's surprisingly easy for a chef to lose his passion for food.
Really?: 1) Ok, I realize Carl was once an up-and-coming chef, but now he’s broke and overweight, and he somehow managed to romance women who look like Sofia Vergara and Scarlett Johansson? That seems awfully Hollywood to me. (Speaking of Johansson, her character isn’t in this movie for very long, even though it’s suggested that she and Carl have feelings for each other. What happened to that relationship?) 2) Funny how all of the in-fighting between Carl, Martin (Leguizamo), and Carl’s son (Anthony) takes place before they set off for Los Angeles, so they generally get along swimmingly on the road.
Rating: Chef is a warm, somewhat-funny, and highly-enjoyable comedy about a talented-but-bored chef who rediscovers his purpose, and reconnects with his ex-wife and son by opening a food truck and getting back to basics. It’s a nice little film, even though Downey’s cameo doesn’t really fit, and there’s no conflict in the the third act (see: “Really?”), so Carl seems to move from one triumph to another. 8/10 stars.