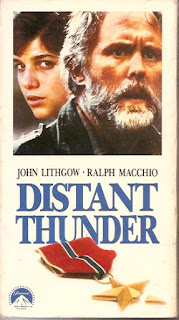 Coming Back From Vietnam Movie #8
Synopsis: If you ever wanted to see the Karate Kid get slapped around by the dad from Harry and the Hendersons, this is totally your movie.
Blurb From the VHS Jacket: “A handful of emotionally-scarred Vietnam vets hide out in Washington’s rain forest, living as if the fighting might erupt at any time. One day it did…”
What Did I Learn?: It’s a really bad idea to tell a mentally-unstable former Navy Seal to go fuck himself. Just sayin’…
You Might Like This Movie If: you figure it must be 114 minutes of relaxing white noise.
Really?: 1) So wait, Mark (John Lithgow) and Jack (Ralph Macchio in a role where he isn’t given much to do) don’t even meet until the movie is at least half-way over? And then another vet suddenly turns psychotic, and the film becomes an action-thriller in the third act? 2) Funny how Jack has never known his father, yet he somehow wakes up in local hospital knowing his Dad is about to ‘kiss a train’, and he knows exactly where to find Mark without driving all over unfamiliar territory.
Rating: I have to give Distant Thunder a bit of a mixed review. While I have never been a huge John Lithgow fan (he was quite good as the Trinity killer in the third season of Dexter, however), he delivers a touching, and highly believable performance as Mark Lambert, a troubled man who somehow finds the courage to reach out to his estranged family for help. The film more-or-less works as a character-driven drama until the last half hour when the plot veers off into a strange direction (see: “Really?”) and we’re treated to a highly contrived reconciliation between father and son. 6.5/10 stars.