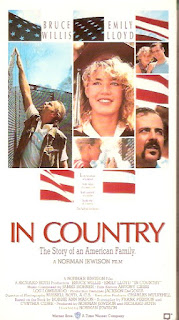 Coming Back From Vietnam Movie #1
Longtime readers of this blog may remember the time I reviewed a dozen Vietnam War movies in August, 2012. In January of this year, I added another four reviews, and promised to provide commentary on a related genre: films about the aftermath of the war, and the men who came home from Vietnam. Generally speaking, these movies can be divided into two categories: dramas about emotionally messed-up former soldiers attempting to reconnect with their families and friends in small town America, and action-adventure flicks about veterans who want some payback. Interestingly, Rolling Thunder falls into both categories.
Synopsis: Overconfident child of the 1980s discovers the Vietnam War was like... totally uncool and grody to the max!
Blurb From the VHS Jacket: “At 17 Samantha Hughes of Hopewell, Kentucky, is pretty, energetic, headstrong… and curious about the father she never knew.”
What Did I Learn?: Apparently, the Vietnamese jungle looks a lot like the forest outside of Hopewell Kentucky. (Oh wait, I think I learned that from The Green Berets)
You Might Like This Movie If: You really want to see a big-time Hollywood movie star attempt a Southern accent.
Really?: 1) See: “What Did I Learn?” 2) So, how does Emmet (Bruce Willis) actually support himself? Everyone urges him to take a job at the local tire plant, but he never gets around to doing so, and he always seems to have money for booze and smokes. 3) Am I alone in thinking that tryst between Samantha (Emily Lloyd) and Tom (John Terry) - a man who served with her dad in Vietnam, was a little on the creepy side?
Rating: In Country, is a very slow-moving (it takes a looooong time to get started), but warm, funny, and ultimately touching character-driven look at a young woman who desperately wants to learn more about the father she never knew, and his final, tragic days. 7/10 stars.