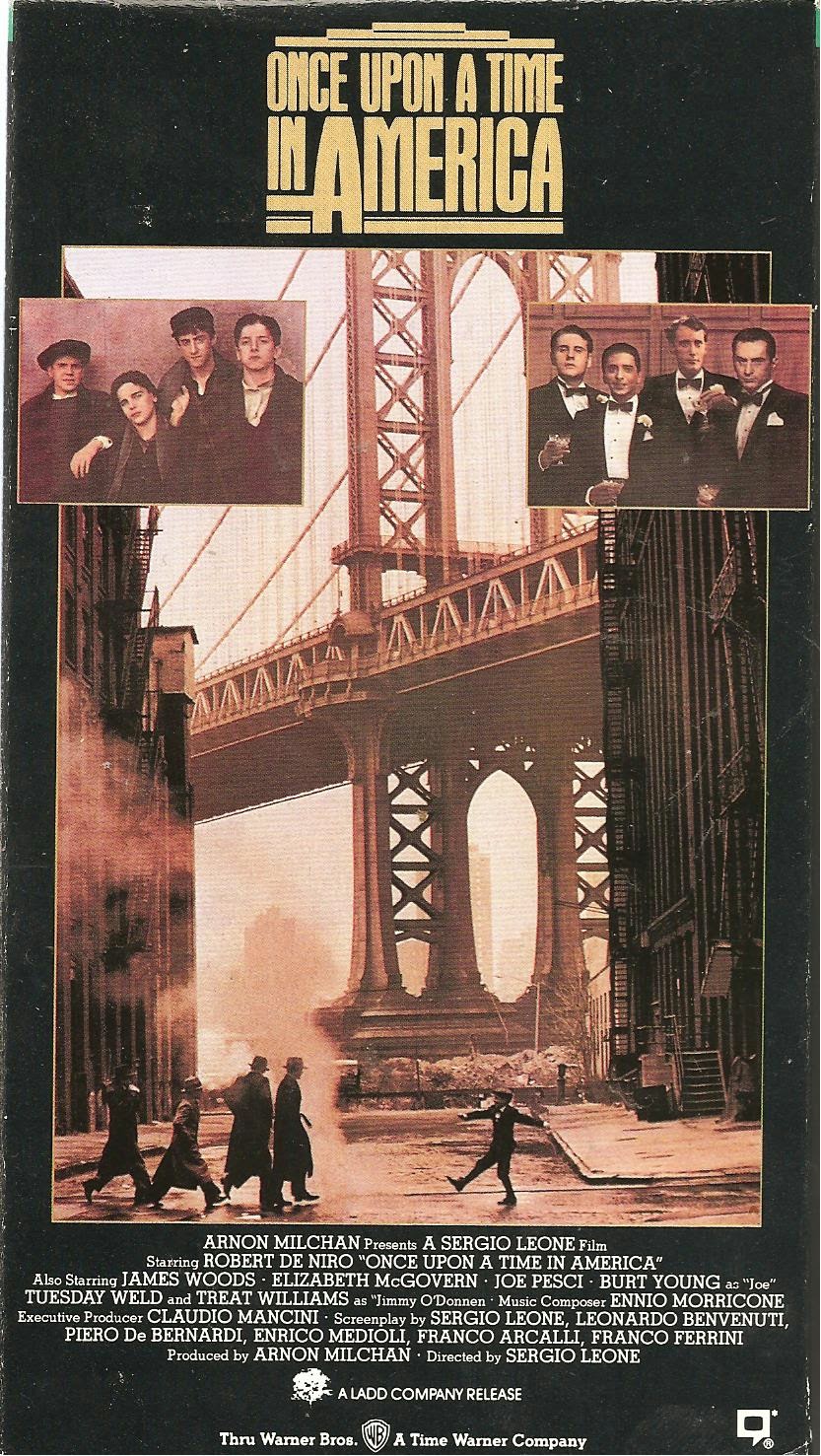 Robert De Niro Film Fest Movie #17 (This would have been perfect for my salute to gangster movies a few years ago, and my tribute to this blog’s favourite unlikeable guy, James Woods)

Synopsis: Not-very-nice rum-runner has life ruined by much bigger scumbag.

Blurb From the VHS Jacket: “Sergio Leone’s epic of crime and betrayal. They grew up in the violent immigrant ghetto of New York’s Lower East Side: Max and Noodles, Cockeye and Patsy, Deborah and Fat Moe. They grew up on the streets and they grew up fast. Fighting their way to the top of the heap, they took a vow to stick together – but that’s not how things worked out.”

What Did I Learn?: It’s really difficult to get “Yesterday” by the Beatles out of your head.

You Might Like This Movie If: You think gangsters are cool, and you enjoy stories that begin with the words "Once Upon a Time..."
Really?: 1) Hmm….if this whole thing was an opium-induced dream, I have to give Noodles credit for imaging 1960s-style vehicles and “Yesterday.” 2) So wait – Max became a Cabinet Secretary in the Johnson Administration? Wouldn’t the FBI have looked into his phony new identity? Couldn’t any number of people from the old neighbourhood identify him? 3) Hold on – did Max jump into the garbage truck at the very end? I realize he wanted to kill himself, but holy shit, there are much better (and far less painful) ways of doing that. 4) I realize DNA research was in its infancy in the early 1930s, but couldn’t the hospital take some blood tests and eventually figure out which baby belongs to which parents?

Rating: While I don’t have a favourite movie, Once Upon a Time in America is certainly one of my favourites – it’s a poignant, and incredibly haunting masterpiece. Noodles (De Niro) isn’t a nice guy by any stretch of the imagination – he rapes his childhood sweetheart when she breaks his heart – but you can’t help yourself from feeling bad for the guy after Max pulls a rather nasty number on him, and I loved the way Noodles refuses to address him as Max even though he knows the real identity of Secretary Bailey. Oh – I realize I usually pan movies when they’re too long, but OUATIA never seems to drag, even though it clocks in at a whopping 226 minutes. Highly recommended. 10/10 stars.