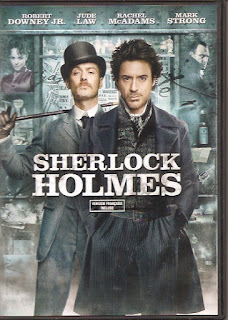 I'm not doing a tribute to Rachel McAdams - she just happened to appear in this, and in Wedding Crashers. Oh, and click the link to check out my review of a very different take on Sherlock Holmes: Without a Clue, starring Michael Caine and Ben Kingsley.
Synopsis: It’s Sherlock Holmes... for anyone who thinks the Arthur Conan Doyle stories sorely needed martial arts-style fighting, explosions, and superhuman stunts.
Blurb From the VHS Jacket: “The hangman did his job, Dr. Watson declared the condemned man dead…. and yet Lord Blackwood has emerged from the tomb to assert his deadly will over 1890 London.”
What Did I Learn?: 1) Never theorize before you have data. Invariably, you end up twisting facts to suit theories, instead of theories to suit facts. 2) No girl wants to marry a doctor who can't tell if a man's dead or not! 3) There is a toxin, refined from the nectar of the rhododendron ponticum. It's quite infamous in the region of Turkey bordering the Black Sea for its ability to induce an apparently mortal paralysis. 4) How terrible is wisdom, when it brings no profit to the wise.5) The little details are by far the most important. 6) Death…is only the beginning.
You Might Like This Movie If: You want to see the world's greatest detective in action.
Really?: 1) See: “Synopsis.” 2) I’m still trying to understand Lord Blackwood’s big plot. So, if he and his buddies murder Britain’s Parliamentarians, they can somehow take over the British Empire? Would Queen Victoria have something to say about that? How would the then-God-fearing British feel about being governed by a shadowy Satanic cabal? Wouldn’t that act of mass murder generate a huge backlash? 3) Um, is it really possible to mentally plan out a fistfight four or five moves ahead of your opponent, and have it go exactly the way you envisioned?
Rating: The 2009 Robert Downey Jr. / Jude Law version of Sherlock Holmes isn’t nearly as terrible as several close friends had warned me ahead of time. It’s actually a fairly enjoyable (albeit fluffy and forgettable) action-thriller, and I liked the chemistry between the two leads. My problem, however, is that I simply didn’t want to see Doyle's sleuth reimagined as Christopher Nolan’s Batman, and I strongly suspect that Guy Ritchie and the Warner Brothers execs threw in the fights, explosions and crazy stunts because they were afraid audiences couldn’t handle a more traditional presentation. At the end of the film, I asked myself: “what the heck did I just watch?” 6.5/10 stars.