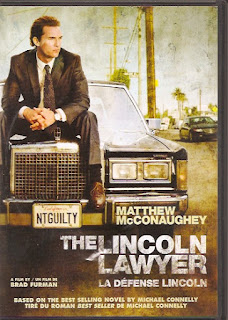 Hey, this would have been perfect for my Let’s Get Legal film fest.
Synopsis: Bottom-feeding ambulance-chaser finally discovers his ethical limits.
Blurb From the DVD Jacket: “Mickey Haller (Matthew McConaughey) is a Los Angeles criminal defence attorney who operates out of the back of his Lincoln sedan.”
What Did I Learn?: It’s not a bad idea to maintain friendly relations with a drug-dealing motorcycle gang, just in case you ever need them to rough somebody up.
You Might Like This Movie If: You want to see the film that spawned a line of car commercials... and their parody.
Really?: 1) Wait - early on, we discover that Roulet’s attack on the young prostitute was foiled by a gay couple who heard the struggle and intervened. What happened to them? Why does neither the prosecution nor the defence call them as witnesses in the case? 2) Gee, if I were locked up in jail on a bogus conviction, and my lawyer showed up a few years later with a mugshot photo and asked: “is this the guy you saw that night?” I’m pretty sure I wouldn’t get angry and run back to my cell.
Rating: The Lincoln Lawyer suffers from a few credibility problems (see: “Really?”), but it’s otherwise a suspenseful, and highly enjoyable courtroom thriller featuring nice performances from McConaughey as a sleazy-but-likeable attorney and Marisa Tomei as his long-suffering ex-wife and occasional courtroom adversary. 8/10 stars.