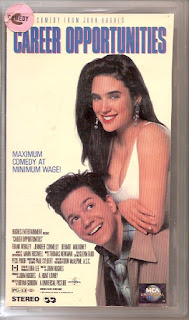 Synopsis: Ok, do you remember Ducky from Pretty in Pink? Well, just imagine he meets Jessie Wyler from Against All Odds (who looks exactly like Gloria Harper from The Hot Spot), and they somehow wander into Dog Day Afternoon.
Blurb From the VHS Jacket: “The town con and the town beauty team up to outwit a half-wit pair of would-be burglars in this hilarious new comedy from John Hughes.”
What Did I Learn?: Apparently, Target doesn’t hire nighttime security guards and it expects a single janitor to clean an entire store over the course of a 10-hour shift. Oh, and nobody gets a set of keys on their first day.
You Might Like This Movie If: You really, really want to watch Jennifer Connelly and Frank Whaley roller skate to some bad early 1990s dance music.
Really?: 1) See: “What Did I Learn?” 2) I can understand why Jim (Whaley) isn’t doing much with his life, but why isn't Josie in college, or working for her father? 3) So, wait - Jim makes a really big deal about the fact that he’s locked in the store without a set a keys, but the burglars somehow manage to get inside without tripping any alarms? How did they do that? 4) Speaking of the two hoods, we’re informed that they’re cold-blooded killers, yet they never think about raping Josie, or even tying up their hostages. Heck, they actually allow Jim to continue cleaning the place. 5) Ok, this is a big one…. Jim and Josie knock the burglars unconscious. Do they pick up the guns and call the cops? No - they run away and force the burglars to chase them down.
Rating: Career Opportunities might be described as a surrealist adolescent romantic comedy, but it isn’t one of Hughes’ better movies; its ending is far too abrupt, I had trouble believing Josie would ever fall for Jim in real life, and the dialogue sounds written, rather than authentic. That said, Whaley and Connelly share a nice chemistry, and it’s a lot of fun to watch their characters interact. Career Opportunities could have been a lot more interesting if Hughes had axed the burglars storyline altogether in order to focus on the culture clash of Jim and Josie’s very different backgrounds, but maybe Hughes figured he already covered that ground in Pretty in Pink and Some Kind of Wonderful. 7/10 stars.