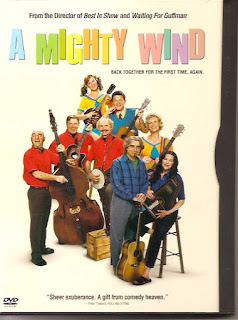 Synopsis: Waiting for laughs, man.
Blurb From the VHS Jacket: “In A Mighty Wind, director Christopher Guest reunites the team from Best in Show and Waiting For Guffman to tell the story (co-written by Eugene Levy) of ‘60s-era folk musicians, who, inspired by the death of their former manager, get back on the stage for one concert in New York City’s Town Hall.”
What Did I Learn?: Back in the 1960s, “preparing for a concert meant playing ‘find the cobra’ with the hotel chambermaid.”
You Might Like This Movie If: You know that a mighty wind can be highly unpredictable.
Really?: Colour-worshipping witches? A Swedish music executive who peppers his speech with Yiddish phrases? Harry Shearer in a dress? Are any of these concepts actually funny, or am I correct in thinking that Guest and Levy essentially ran out of gas, creatively speaking, after Best in Show?
Rating: I wanted to like A Mighty Wind, but it’s the weakest and least memorable of the Christopher Guest mockumentaries. While I really enjoyed Levy’s inspired performance as a weird-but-loveable burnout, neither the songs nor the dialogue of A Mighty Wind are all that funny or clever, and the film’s overall tone is a little too good-natured to adequately satirize the folk music scene. Check it out if you’re a die-hard Spinal Tap fan, and you want to watch Guest, Michael McKean and Shearer on stage as The Folksmen. 5.5/10 stars.