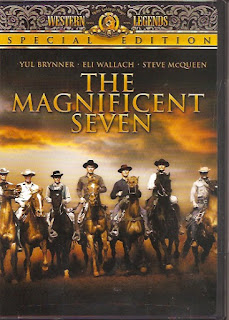 Synopsis: It’s essentially The Three Amigos without the laughs.
Blurb From the DVD Jacket: “Spectacular gun battles, epic-sized heroes and an all-star cast that includes Academy Award winners Yul Brynner and James Coburn, together with Steve McQueen, Eli Wallach and Charles Bronson, make The Magnificent Seven a legend among westerns.”
What Did I Learn?: Yul Brynner had the acting talent of a toaster.
You Might Like This Movie If: You want to see the movie that inspired an extremely lacklustre remake.
Really?: 1) These guys would have to be the world’s cheapest mercenaries. 2) So, the peasants score a major victory against Calvera (Wallach), and then…. they want to surrender? 3) Um…. wouldn’t Calvera realize Chico has infiltrated his camp? Are we supposed to believe Calvera doesn’t know his own men? 4) Hold on - the Magnificent Seven are responsible for killing quite a few of Calvera’s men, he gets the upper hand against them, and then…..he lets them go? 5) Let me see….the townspeople actually betray the Seven, without any regard for their safety, yet our rearmed heroes later decide to return to settle the score with Calvera? Oh, come on….
Rating: While it’s generally regarded as a classic Western, and it certainly features an impressive cast, The Magnificent Seven is greatly overrated. The film is marred by terrible acting (not just from Brynner, by the way - many of his colleagues wildly overact), a lack of any character development, and a plot that stops making any sort of sense at the half-way point (see: “Really?”). Check it out only if you want to watch McQueen upstage Brynner’s wooden performance by waving and removing his hat at odd moments. 5.5/10 stars.