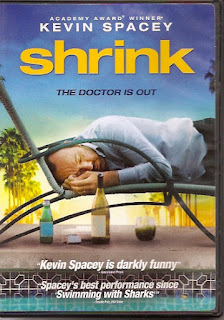 Synopsis: Self-absorbed, burnt-out therapist provides sage advice to motley collection of screw-ups while remaining strangely oblivious to his own problems. So, it’s basically In Treatment, except Paul Weston is a major pothead.
Blurb From the DVD Jacket: “SHRINK stars Kevin Spacey as Henry Carter, LA’s top celebrity psychiatrist with an A-list clientele, including a kinda-famous actress (Saffron Burrows), a wildly insecure young writer (Mark Webber), and an obsessive-compulsive super-agent (Dallas Roberts).
What Did I Learn?: 1) The first step toward happiness is always the hardest. 2) Happiness. Happiness is a word for a feeling. Feelings are rarely understood; in a moment they are quickly forgotten and misremembered. 3) It's all bullshit and then you die. 4) Titanic is way too long, and the boat sinks
You Might Like This Movie If: You know that therapy isn't always easy.
Really?: 1) I have to wonder: how do so many of Henry’s patients (as well as his drug dealer) all seem to know each other? 2) So, wait…. Jemma (Keke Palmer) and Henry are both rightly furious with Jeremy (Webber) for basing his screenplay on her confidential file, yet everyone decides to forgive and forget just because it’s so well-written? I’m not buying that one.
Rating: Shrink is a sometimes-funny, sometimes-poignant story about a depressed psychiatrist attempting to recover from a devastating emotional blow. The film works best when we watch Henry analyze his patients, but Spacey’s character isn’t on screen all that much, and we mostly see him smoke weed in a parking lot or passed out after a night of booze and drugs. Shrink is a good movie that could have been better by focusing more on Henry’s work, and developing a more believable ending. 7/10 stars.