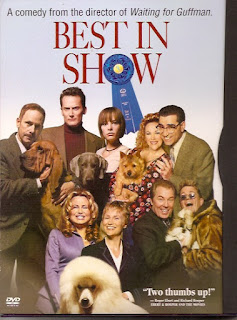 Synopsis: Waiting for Woofman.
Blurb From the VHS Jacket: “Waiting for Guffman’s Christopher Guest directs and many of that film’s stars (including Fred Willard as a loopy commentator) reunite for this hilarious look at dog show participants (and the pooches who love them).”
What Did I Learn?: Nobody wants to hear a song about terriers.
You Might Like This Movie If: See: “What Did I Learn?”
Really?: I realize the hotel manager (Ed Begley Jr.) wants to maintain good relations with the dog show people, but I’m pretty sure that any couple who tried to check in without a solvent credit card, adequate cash or travellers cheques would be shown the door, not a storage room with a couple of folding cots.
Rating: Best in Show is a nice, good-natured satire of the world of competitive dog shows that doesn’t quite live up to the high expectations that Guest established for himself with This is Spinal Tap and Waiting For Guffman. Overall, it’s populated with a lot of adorable pooches and mostly unlikeable characters  (Parker Posey and Michael Hitchcock are nearly unwatchable as the upwardly mobile-and-obnoxious Swans). Still, I have to give Best in Show at least one extra star for Willard’s deceptively dopey commentary in the final 20 minutes - he’s hilarious. 7/10 stars.