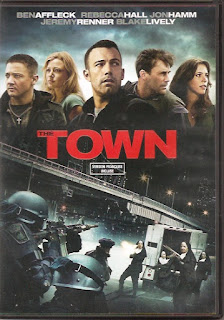 Synopsis: Small-time armed robbery mastermind gets the bright idea of seducing and dating the one witness to his gang’s crimes. Wait, WTF?
Blurb From the VHS Jacket: “As he plans a job that could resume in his gang’s biggest score ever, a longtime thief plans a way out of the life and the town while dodging the FBI agent looking to bring him and his bank-robbing crew down.”
What Did I Learn?: 1) You gotta chase the rabbit if you want the tail. 2) No matter how much you change, you still have to pay the price for the things you’ve done. 3) Anyone who lawyers up is guilty. 4) A one-square-mile Boston neighbourhood called Charlestown is apparently America’s crime capital.
You Might Like This Movie If: You know that it isn't easy to pull off an armed robbery.
Really?: 1) See: “Synopsis.” Doug (Ben Affleck) is presented to the audience as a fairly street-smart career criminal. Does he seriously believe he can keep his involvement in the crime a secret from Claire? 2) Hmm… burying $500,000 in a community garden in the hope that Claire will find it seems a bit risky, but I guess Doug doesn’t have too many choices near the end of the movie.
Rating: Plot-wise, The Town bears an uncanny resemblance to Heat: a criminal mastermind plans one last big score involving stolen cars and automatic weapons while he romances a nice lady, and dodges an obsessed cop. While Heat featured great dialogue and a memorable scene between Al Pacino and Robert De Niro, The Town is far more formulaic and depressing. Check it out if you’ve ever wanted to see Jon Hamm portray somebody other than Don Draper in Mad Men. 6/10 stars.