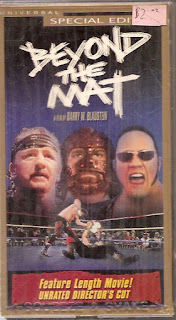 Please click the link to read my review of WWF High Flyers.

Synopsis: Documentary filmmaker criss-crosses America, discovers that professional wrestling is populated by con artists, ‘roided-up muscleheads, drug addicts, bad fathers, and violent, sadomasochistic lunatics, and then insists they’re just like you and me.
Blurb From the VHS Jacket: “There’s No Script For What Happens Outside The Ring!”
What Did I Learn?: 1) Mick Foley earned a salary that was somewhere in the “high six figures” in the late 1990s. 2) “You have to be a prick in this business. If you don't, the wrestlers will run all over you. Their egos are such and-and-and their characters are such that they will just walk all over you. So if you think you can be a nice guy and be a successful promoter in professional wrestling, you better get out of this business right now.” 3) I’m really, really glad Jake “the Snake” Roberts isn’t my dad.
You Might Like This Movie If: You're really in the mood to watch a super-awkward scene of Terry Funk attempting to convince a far-less successful buddy to attend his final wrestling match.
Really?: 1) Honestly, I’m shocked that Jake’s daughter allowed a film crew to record so many intimately personal moments between herself and her father. 2) Hmm…. I’m pretty sure that if a doctor told me my arthritic “bad knee” needed to be replaced, and my almost-as-arthritic “good knee” would likely give me another 30 years of chronic pain, I probably wouldn’t continue to wrestle, but then again, my name isn’t Terry Funk and I’m not a hardcore wrestling legend. 3) Funny how Blaustein spent all of that time with Jake Roberts, and nobody mentions a word about his snakes.
Rating: Barry Blaustein deserves a great deal of credit for creating a documentary that’s informative, watchable, and even emotionally moving (Jake’s story is best described as heartbreaking). Beyond the Mat is brutally honest about the world of pro wrestling, yet it treats all of its participants - Funk, Foley, Roberts, and even jobbers from Northern California respectfully. Highly recommended. 9/10 stars.