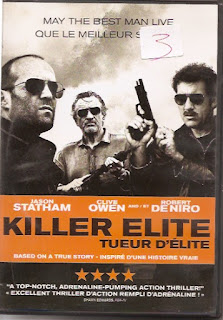 Hey, I could have used this for my tribute to Robert De Niro in 2014.
Synopsis: Amoral, highly-skilled professional killers bump off a bunch of other amoral, highly-skilled professional killers because…. oh honestly, who cares?
Blurb From the DVD Jacket: “Inspired by true events KILLER ELITE is an action-adventure spy film that follows Danny (Jason Stratham), one of the most skilled special-ops agents.”
What Did I Learn?: 1) Life is like licking honey from a thorn. 2) Killing is easy. Living with it is the hard part. 3) MFWIC stands for Motherfucker What’s in Charge. 4) Two percent of men are natural killers. 5) Overall, 1980 was pretty awful year.
You Might Like This Movie If: You know there's no such thing as a killer elite [Seriously, this is a pretty far-out clip]
Really?: 1) Holy crap, how much physical abuse can Stratham’s character actually take? And after a savage interrogation/fight, he jumps out of a second-story window still tied to a chair, and he's somehow A-ok? 2) Funny how this film takes place in 1980, and yet the characters use Glock pistols, and there’s never a single reference to the Cold War. Come to think of it, the music and fashions presented are also pretty nondescript.
Rating: I had high hopes for Killer Elite, but they weren’t met. I was expecting something along the lines of Ronin (also starring De Niro), yet the film is far more reminiscent of George Clooney's The American, or one of Steven Segal’s more forgettable outings. Killer Elite is hard to follow (one minute they’re in England, then the Middle East, then Paris…..), and it’s difficult to empathize with Stratham’s character or care about what happens to his merry band of killers. Moreover, the action scenes are so super-human (see: “Really?”) that the film’s credibility soon goes out the window. 6/10 stars.