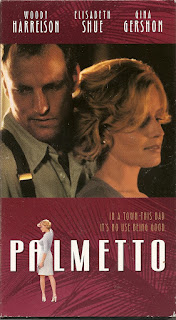 Synopsis: Woody from Cheers stars as not-very-bright-or-likeable patsy in forgettable, implausible, ho-hum film noir thriller.
Blurb From the VHS Jacket: Stage a bogus kidnapping, collect a satchel full of ransom cash, take 10% off the top and have a nice life, see ya later. They told Harry Barber the plan would run like clockwork. But – tick tock – it’s hapless Harry who’s running out of time.”
What Did I Learn?: 1) There’s nothing worse than a writer with nothing to say. 2) If an attractive woman ever offers you 50 grand to take part in a criminal enterprise with minimal involvement, start running.
You Might Like This Movie If: You agree with Harry that Palmetto bugs can be pretty good company.
Really?: 1) Hmm…. the plan can only work if Harry stays in Palmetto, yet the minute he’s released, he immediately starts walking towards Miami, and he’s convinced to return to town by Nina (Gina Gershon), who isn’t part of the conspiracy! 2) Speaking of Gina Gershon, she doesn’t have much to do in this movie, does she? I mean, who’s idea was it to caster Elizabeth Shue as the femme fatale, and Gershon as the adoring girlfriend? Wouldn’t it have made more sense to write Nina out of the script completely? Isn’t it far more likely Harry would fall for Shue’s character if he didn’t have a beautiful woman waiting for him at home? 3) Wait - Odette (Chloe Sevigny) informs Harry that his meeting with Shue’s character was no accident, and yet he doesn’t immediately get the hell out of Dodge? 4) Wow….that ending was right out of the 1960s Batman TV series.
Rating: Meh - see “Synopsis” and “Really?” 5.5/10 stars.