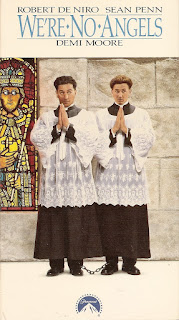 This would have been perfect for my tribute to Robert De Niro in 2014.
Synopsis: Escaped convicts fool inhabitants of world’s dumbest monastery.
Blurb From the VHS Jacket: “There’s something funny about those two new priests. In fact, there’s something downright hilarious. Because Robert De Niro and Sean Penn aren’t clergymen at all. They’re escaped cons whose only prayer is to pass themselves off as men of the cloth.... and pass right by a police blockade at the border into the safety of Canada.”
What Did I Learn?: If you ever steal a drying shirt, and a priest remarks that there’s a still a clothespin on it, your best response is to say that it’s a reminder that "God can snatch us up at any time."
You Might Like This Movie If: You know that most men behind bars are basically decent, caring human beings. No, REALLY!
Really?: See: “Synopsis” and “What Did I Learn?” Seriously, I realize most of the humour in this movie comes from the monks and townspeople mistaking Ned and Jim for a couple of famous priests, but how long could they realistically keep up that ruse? They don’t even look like the guys on the dust-jacket of the book they're supposed to have co-written! Moreover, I doubt that Jim’s (Penn) stream-of-consciousness psychobabble would fool a smart Sunday School student, let alone an entire abbey. And I had a very hard time believing a barely-literate Jim would stick around to join the Order when the entire local police force is looking for a man of his age and description.
Rating: We’re No Angels is a highly-contrived, yet compelling remake of the 1955 classic, even though it bears almost no resemblance to the original. The film features a number of nice performances (Demi Moore is wonderful as a cynical-and-angry local prostitute who falls for De Niro’s Ned, yet her character isn't played for laughs, so she detracts from the comedy whenever she appears), as well as some impressive on-location shots in the B.C. interior and a funny script from David Mamet. Watch for John C. Reilly in an early role. 8/10 stars.