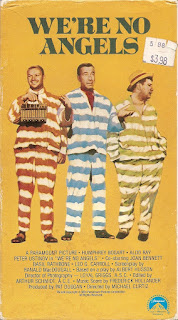 This would have been perfect for my Bogart Film Fest in 2012!
Synopsis: Colourful convicted criminals crash Christmas, comfort classy clan, craftily kill cruel capitalists.
Blurb From the VHS Jacket: “Humphrey Bogart plays one of his rare comedy roles this jaunty excursion about three convicts – Joseph (Bogart), Albert (Aldo Ray), and Jules (Peter Ustinov) – who are plotting their escape from Devil’s Island.”
What Did I Learn?: 1) When a lady faints, one should loosen her clothing. 2) When you have a body you don't want found, everybody falls all over it. 3) Murderers are very polite. 4) A pineapple can be eaten just like an apple. 5) Crooks will always give you a hard day’s work. 6) A man doesn’t travel 4000 just to prove he’s a louse.
You Might Like This Movie If: You really want to watch Bogart go for cheap laughs while he plays a lowlife.
Really?: * SPOILER ALERT! * I watched Papillon a few years ago, so I had a bit of trouble believing that anyone who managed to escape from the prison on Devil’s Island would ever voluntarily turn himself in to the authorities, rather than hop a freighter and return to freedom in France.
Rating: Aside from a ridiculously unbelievable ending (see: “Really?”), We’re No Angels is a charming, and surprisingly enjoyable light-hearted comedy that's still funny even now, over 60 years after it was first released. Moreover, it’s clear that Bogart had a knack for deadpan comedy; some of the dialogue between Bogie and Peter Ustinov are absolutely priceless. Highly recommended. 10/10 stars.