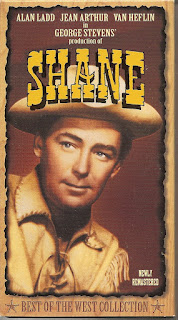 Please click the link to read my review of Heaven’s Gate, another film that dealt with the Johnson County War. Oh, and I’m not doing a tribute to Jack Palance....believe it, or not.

Synopsis: It’s basically Pale Rider, plus an annoying kid, and minus Clint Eastwood.

Blurb From the VHS Jacket: “Acclaimed director George Stevens’ legendary rendition of the quintessential Western myth earned six Academy Award nominations, and made Shane one of the classics of the American cinema.”

You Might Like This Movie If: You want to watch the film that catapulted Palance to creepy stardom.
Really?: 1) *SPOILER ALERT* You know, I’m pretty sure that if I were ever to get shot, I would immediately seek out medical attention. I don’t believe I would get on my horse and ride off into the mountains. 2) So, the bully, Chris Calloway does a complete face-turn? I could see him becoming disgusted with Ryker’s strong-arm tactics and leaving, but why does he feel the need to inform Shane, the guy who beat him senseless earlier in the picture?

Rating: George Stevens’ classic Oscar-winning Western is a bit slow-moving at times, but it’s still a moody and memorable look at a retired gunfighter who tries, and fails to put his violent past behind him. Highly recommended.  9/10 stars.