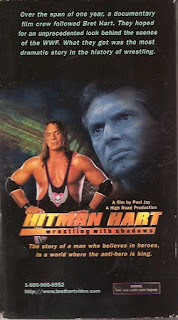 Synopsis: It’s 93 minutes of a middle-aged man in black-and-pink tights taking himself far too seriously.
Blurb From the VHS Jacket: “The story of a man who believes in heroes, in a world where the anti-hero is king.”
What Did I Learn?: If a member of the Hart family ever offers to teach you some submission holds, run like the wind.
You Might Like This Movie If: You really, really like the Hitman.
Really?: Wait….did Bret seriously think Vince would allow him to show up on Raw is War the night after the 1997 Survivor Series, deliver a thank you speech, and then simply forfeit the championship belt? It’s easy to dump on Vince McMahon for being a lying snake, but in the film, Bret doesn’t seem all that keen on developing a realistic compromise.
Rating: While it isn’t as good a sports documentary as Hoop Dreams, Hitman Hart: Wrestling with Shadows offers a compelling look at a Canadian legend, and the events that led up to the infamous “Montreal Screwjob.” It’s interesting to watch Hart - a man at the top of his game who had trouble adjusting to a changing culture within the industry - interact with his fellow performers, and a lot of fun to reminisce about mid-1990s wrestling, but the film has a major problem, aside from its atrocious musical score. Wrestling with Shadows is told entirely from Hart’s perspective, and it doesn’t ask many tough questions or critically evaluate its subject. 7.5/10 stars.