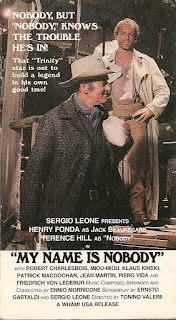 Synopsis: Have you ever harboured a secret desire to see Once Upon a Time in the West reshot as a live action Bugs Bunny cartoon? Today is your lucky day!

Blurb From the VHS Jacket: “Sergio Leone’s ultimate spaghetti western is lavished with changing landscapes and beautifully choreographed action scenes, including one of the most incredible shootouts in screen history.”

What Did I Learn?: Wagner’s The Ride of the Valkyries sounds really, really awful when it’s played on a tinny synthesizer.

You Might Like This Movie If: You really want to see an older gent help out a Nobody.
Really?: 1) See: “What Did I Learn?” Seriously, Ennio Morricone’s musical score is all over the map.” 2) I realize this film isn’t meant to be taken all that seriously, but is “Nobody” some sort of super-human gunslinger? How in the world can he down three pint glasses of whisky and still shoot straight, let alone stand upright?

Rating: Slapstick humour and serious melodrama mix uneasily in “My Name is Nobody,” an enjoyable, yet contrived, and extremely uneven 1970s Western featuring Henry Fonda as an aging legend, and Terence Hill as the wacky title character. Check it out if you’re a die-hard Fonda fan. 7/10 stars.