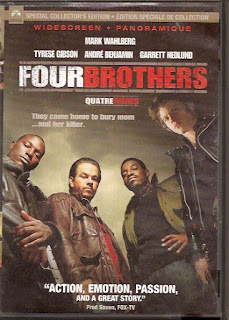 This would have been perfect for my salute to Revenge films in 2011.
Synopsis: Four bros, just regular Joes with plenty of woes from the lives they chose, come to blows with lots of foes. Who killed the old lady? Nobody knows, but the mystery grows.
Blurb From the DVD Jacket: “After their adoptive mother is gunned down during a grocery store holdup, the estranged brothers reunite to seek revenge and take matters into their own hands.”
What Did I Learn?: 1) You keep knocking on the devil's door long enough and sooner or later someone's gonna answer you. 2) Evelyn Mercer was the greatest mother that four degenerates ever had. 3) You pay out-of-town shooters to get the hell back out of town. 4) Dead men may not tell any tales, but they sure leave important shit lying around.
You Might Like This Movie If: You figure it must be a 108-minute-long Woody Herman music video.
Really?: 1) Where are the f***ing cops? I mean, these guys chase the hired killers’ car all over the city on icy roads, guns blazing, and we never hear so much as a siren. 2) Don’t any of the Mercers have a desire for privacy? I had a hard time believing Jack (Garrett Hedlund) would want to shower with Bobby (Mark Wahlberg) taking a crap a foot away from the tub. And then Angel (Tyrese Gibson) enters the bathroom and asks them to inspect his you-know-what? 3) So, Victor Sweet has Evelyn murdered to send Jeremiah a message, or did he know Jeremiah would collect on a big insurance policy and he’d get paid? Strangely, the actual motive for the killing is never made entirely clear.
Rating: I wanted to like Four Brothers a lot more than I actually did. While the film features some exciting action sequences, interesting cinematography of frozen Detroit, and a kick-ass soundtrack of early-1970s Motown hits, it’s otherwise a forgettable and muddled remake of The Sons of Katie Elder with thuggish heroes and a very lacklustre ending. Oh, and there’s a Thanksgiving dinner scene where three of the leads converse with their dead mom that’s so bad I had to fast-forward through it. 6/10 stars.