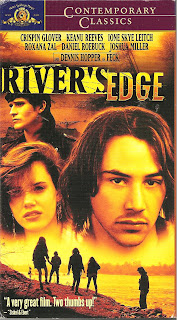 Synopsis: Hilarity ensues in Riverdale after Big Moose strangles Midge. Jughead becomes an accomplice-after-the-fact, while Archie drops a dime to Five-O and sings like a canary.


Blurb From the VHS Jacket: “On the bank of a river lies the naked body of a young girl who has been brutally murdered. At the nearby high school, a burly senior, Samson (Daniel Roebuck) brags to Matt (Keanu Reeves) and his friends about how he killed her. Drunk and stoned, the doubting teens trudge to the river and discover that he wasn’t lying.”


What Did I Learn?: If an acquaintance kills his girlfriend and doesn't seem particularly concerned with getting caught, it's not a great idea to help him out by concealing the evidence, or hiding him with your insane, dope-dealing buddy.


Really?: Apparently, this movie was sort-of based on a real incident, so maybe it's possible that a high school student could strangle his girlfriend, brag about it at school, and days could pass before anyone does anything about it. That said, it's a bit strange how the only place Samson's buddies can hide him is with another borderline-psycho Feck (Dennis Hopper) who also murdered his girlfriend, years earlier.


Rating: I had mixed feeling about River's Edge. On the one hand, it's a well-written, thought-provoking, and powerful movie. I'm not a big Keanu Reeves fan, but he does a very good job of carrying the film, and Ione Skye is incredibly sexy. Unfortunately, I had a lot of trouble believing certain parts of the plot (especially the pairing of Samson with Feck, who seems a lot like Hopper's character in Blue Velvet), and Crispin Glover seems to be acting in a totally different movie than the other actors; he's so over-the-top that I half-expected him to announce: "Live from New York, it's Saturday Night!". Let's call River's Edge good, but not great. 7/10 stars.