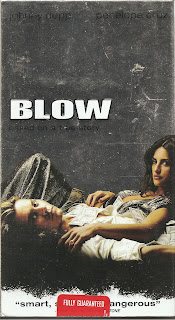 Dang - this would have been perfect for my salute to addiction movies!


Blurb From the VHS Jacket: “Based on a true story, Blow chronicles the high-speed rise and fall of George Jung (Johnny Depp, Sleepy Hollow), who became the largest importer of Colombian cocaine in the United States, forever changing the face of drugs in America.”


What Did I Learn?: It's not a great idea to put your cash into a Panamanian bank for safe-keeping.


You Might Like This Movie If: You've always wanted to see Paul Reubens (aka Pee Wee Herman) in a drug movie. Oh wait...


Really?: 1) So... George's best friend, Tuna, simply disappears from the movie a the end of Act One? Maybe that's the way it happened in real life, but doesn't the audience deserve some explanation? 2)  I'm pretty sure that if I were wanted by the cops, and my mother dropped a dime to Five-Oh, I wouldn't speak to her again for a LONG time afterwards. 3) Um...I realize George is quite angry with Diego, but come on...pointing an empty gun at him in front of a dozen armed Colombian guards is just plain idiotic.


Rating: Blow is a well-made, but somewhat forgettable biopic about the guy who more-or-less created the American cocaine market in the 1970s and early 1980s. While Depp provides an impressive performance, his character is an obnoxious, self-absorbed jerk, and his wife (Penelope Cruz doesn't make an appearance until an hour so into the picture) isn't any better. Curiously, for a movie that showcases the drug business, it's strange that there aren't any action scenes (didn't Jung ever encounter rival dealers?) and it's tough to sympathize with  lowlife who never tried any other line of work, and made a whole lot of bad decisions. 6.5/10 stars.