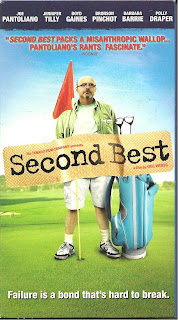 
Blurb From the VHS Jacket: “Losers of the world unite!”


What Did I Learn?: You can't convince a gay man to give women a shot by favourably comparing a vagina to an asshole.


You Might Like This Movie If: you've always wanted to watch a full-length, feature film version of this video.


Really?: I had a bit of a hard time believing Richard would stay in touch with Elliot all those years. I certainly think he would sever the relationship after Elliot's failed physical attack.


Rating: Second Best is an often-funny, well-acted, and brilliantly-written dark comedy about a middle-aged writer and his less-than-successful buddies who are very, very down on themselves. Hilarity ensues when their one wealthy, and popular friend Richard comes to town. Highly recommended 9/10 stars.