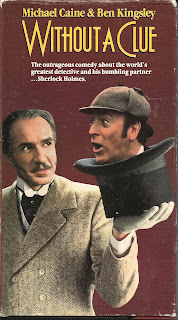 Synopsis: It's Holmes and Watson, re-imagined as Dubya and Cheney.


Blurb From the VHS Jacket: “What if Dr. Watson were the real master crime solver, and Sherlock Holmes merely a figment of Watson’s imagination? That’s the stage for this delightful comedy.”


What Did I Learn?: Deductive reasoning really isn't for everyone.


Really?: Without a Clue is a screwball comedy, so it might not be entirely fair to judge it along these lines. That said, considering the fact that "Holmes" often gets drunk, and frequently makes incredibly boneheaded remarks, I had a hard time believing he and Watson could keep such a charade going for very long.


Rating: Without a Clue is a charming, yet forgettable little comedy from the late 1980s. The story and dialogue are a bit weak (it's basically a one-joke movie: Holmes and Watson don't like each other very much, and they bicker all over Victorian England), and the finale a tad lackluster, but Ben Kingsley and Michael Caine enjoy some outstanding comedic chemistry together, and the film is a lot of fun. 7/10 stars.