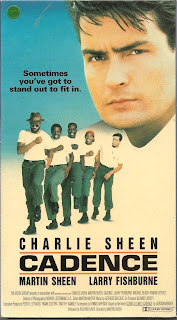 Hmm... Cadence isn't exactly a Vietnam movie, although it takes place somewhere in the 1960s, and Charlie Sheen gets shipped out right at the end. It's an interesting companion film to Platoon.

Synopsis: Charlie Sheen arrives at the startling realization that he isn't black.


Blurb From the VHS Jacket: “When the rebellious Private Bean (CHARLIE SHEEN) lands himself in an army stockade, he finds that all of his new roommates belong to tightly-knit club that he can never hope to join. They are black.. and he is clearly not.”


What Did I Learn?: If you're in prison and the warden makes an effort to be your friend (non-sexual, that is), for fuck's sake, play along and don't be an asshole.


Really?: 1) So...what were the other prisoners accused of doing? We hear two of their stories, but what about Stokes (Fishburne), or Sweetbread? 2) Funny how this movie is supposed to be a period piece yet very little effort is made to make it seem like the mid-1960s. Come to think of it, both Germany and Bean's hometown in the US look awfully similar to each other. 3) Hmm... up until the very end, I don't think there was ever any mention of Sweetbread wandering off on his own. 4) Evil sergeant McKinney (Martin Sheen) hands out "gigs" (demerits) like condoms at a brothel, but they never seem to lead to any consequences.


Rating: I didn't know what to expect from Cadence, but it's a nice, little low-budget movie that somehow fell down the memory hole after it was released two decades ago. Charlie Sheen enjoys some obvious chemistry with his father, and with Fishburne and the other prisoners, and there are a number of memorable moments. That said, I have a few complaints: a) the opening scenes featuring Bean at his father's funeral, and then getting the tattoo are unnecessary, b) McKinney is a jerk, but neither Bean nor the other prisoners ever appear to be in all that much trouble/danger until the end of the movie, and c) I'm not sure I approve of the message of this film... Bean realizes he has to be a team player, and goes to Vietnam determined to be a better soldier? I dunno. 6.5/10 stars.