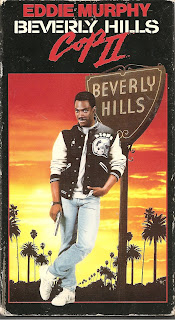 
Blurb From the VHS Jacket: “The heat’s back on! And Eddie Murphy is cool as ever in this sizzling, smash-hit sequel to Beverly Hills Cop. Axel Foley (Murphy) is back – back where he doesn’t belong! He’s going ‘deep, deep, deep undercover’ into the chic wilds of Southern California, unleashing his arsenal of blazing gunfire and rapid-fire gags against a gang of international munitions smugglers”


What Did I Learn?: Apparently, high-end jewelry stores in Beverly Hills didn't think to install security cameras in the late 1980s, so identifying a 6-foot-tall blonde would have been impossible.


You Might Like This Movie If: you'll watch anything from the late 1980s that involves alphabet-related crimes.


Really?: Wow...where do I begin? Do I start at the very beginning and ask why the *Detroit* Police Department would spend over 60 grand on a car for Axel Foley, when even Crockett and Tubbs used vehicles and clothes that were confiscated from drug dealers? Do I ask why Foley, Bogomil, Rosewood and Taggart are now the best of friends, when there was *at best* some grudging respect at the end of the first movie? Do I point out the obvious plot holes (Bogomil's daughter works at the very same insurance firm used by the bad guy, and she has access to his files? The villains show up as guests at Hugh Hefner's place immediately after a robbery? And why alphabetize the crimes at all?) Oh, and why did Foley have to throw out Rosewood's perfectly good vitamins?


Rating: Beverly Hills Cop II has a few decent action sequences, and some nice buddy chemistry between Foley, Rosewood and Taggart, but it's a borderline bad movie for a few reasons: a) the plot makes no sense, b) the villains (including the nasty and incompetent police chief) are all one-dimensional cartoons, and c) - this is a big one - Axel Foley is a loud, boorish, unfunny, and obnoxious asshole in this film. Seriously, it's hard to sympathize with  a guy whose idea of pulling a disguise is to scream in somebody's face for several minutes until they give him what he wants. I'm barely recommending Beverly Hills Cop II. 5.5/10 stars.