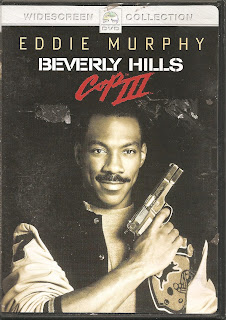 
Blurb From the DVD Jacket: “Axel Foley (Eddie Murphy) journeys back to Beverly Hills for a real roller coaster thrill ride at the Wonderworld amusement park! Joined by old pals Billy Rosewood (Judge Reinhold) and Serge (Bronson Pinchot), Axel becomes the hottest new attraction as he chases down the bad guys on the rides, through the shows and in the underground maze beneath the park.”


What Did I Learn?: Yeesh...maybe Beverly Hills Cop II wasn't all that bad.


Really?: 1) So, where's Bogomil? Come to think of it, Axel meets Serge for the first time in years, and neither man mentions Jenny Summers, the only person (aside from Victor Maitland and Michael Tandino) they have in common. 2) Upon identifying Ellis De Wald as Todd's killer, shouldn't Foley's next move have been to contact the Detroit District Attorney and ask for an arrest warrant, or an extradition order, or something? 3) So, Billy is no longer a plant-loving gun nut? Oh well...no explanations necessary. 4) Um... there's no way in the world I'm buying any of that "Spider" ride rescue sequence; Foley would have fallen any number of times as he jumped from cage to cage, and he then he somehow saves two children while hanging from a rope - one-handed? Bullshit.


Rating: Beverly Hills Cop III is atrocious on many levels. While it's hardly the worst movie I've ever seen, it's a huge letdown once you've seen the first BHC. Interestingly, the first two films were also revenge thrillers, yet they had a sense of insouciant fun that's clearly missing from this movie, even though it's largely set in an amusement park; come on - Axel Foley staying in a shitty motel, and never once pulling a con? Instead, we're treated to numerous scenes of Foley holding a gun to De Wald's neck, or beating the shit/attempting to beat the shit out of him, and it gets old, fast. The action scenes aren't credible, the "comedy" isn't funny, and the soundtrack stinks, big time (although the down-tempo, tuba version of Axel F was sort-of cute). I cannot recommend this movie. 3/10 stars.

Would It Work For a Bad Movie Night?: Take a drink every time Axel Foley says the word "killer".