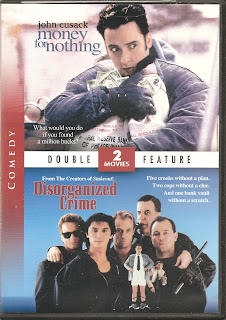 Synopsis: It's Palookaville - in Montana.

Blurb From the VHS Jacket: “Five crooks without a plan. Two cops without a clue. And one bank vault without a scratch.”

What Did I Learn?: Rural police forces are stretched so thin, you can easily do several crimes in the course of an hour and get away with them - thanks for the tip, Disorganized Crime!

Really?: 1) Wow...Frank Salazar (Corbin Bernsen) has some of the worst timing of any human being on Planet Earth, doesn't he? 2) So wait... the gang wants to bail Frank out of jail using the money they just stole from the local bank? Aside from the questionable wisdom behind such a decision (doesn't he still have to go to trial?), doesn't that seem a tad suspicious?

Rating: Disorganized Crime is a fun, nearly-forgotten comedy caper film from the late 1980s. It isn't that hilarious (Ed O'Neill provides most of the laughs as a very determined, but not terribly competent New Jersey police detective out of his element), but it has its moments, and it's entertaining to watch the crooks bicker with each other before they pull the big job. Overall, not bad. 7/10 stars.
http://www.imdb.com/title/tt0097211/?ref_=fn_al_tt_1