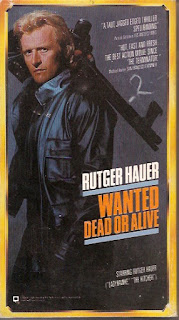 Let’s Get Those Terrorists Movie #3 (This would have been perfect for my salute to revenge-themed films)
Synopsis: Semi-retired crime-fighter who lives on a houseboat comes back to catch the evil SOB who eluded him… no, that’s the Synopsis for Blood Work. Um…bad-assed bounty hunter targets slippery law-breaking political dissident who likes to blow up valuable infrastructure….no wait, that’s the Synopsis for The Empire Strikes Back!
Blurb From the VHS Jacket: "Rutger Hauer IS Nick Randall. Loner, hunter, former CIA career man. A high-tech, fourth generation bounty hunter who speaks softly and carries a very big stick."
What Did I Learn?: A friend drops by in a swimsuit and carrying a six-pack, not dressed as one of the Brooks Brothers.
You Might Like This Movie If: You enjoy listening to Rutger Hauer deliver strange lines of dialogue.
Really?: 1 So, Nick enjoys gulping down whisky while he’s behind the wheel of a car? That’s certainly responsible behaviour. 2 I’m curious: what is Malak Al Rahim’s ideology? Is he a Palestinian nationalist? An Islamist? An Arab Marxist? This is never revealed, and his clothing and behaviour don’t provide really any clues. 3 Funny how Rahim blows up a movie theatre full of people (not sure why there were children present for a nighttime showing of Rambo: First Blood Part II, but that’s another quibble), and there’s supposed to be a city-wide panic, but we’re never shown any evidence that this is the case. 4 Hmm… Rahim’s men murder Nick’s girlfriend and his best friend, and we aren’t given many reasons to care. 5 Speaking of which, I realize Nick is pretty bummed out after his houseboat is destroyed, but shooting his own TV set? Who would do that?
Rating: Wanted: Dead or Alive is a cheesy, and rather hum-drum action flick from the mid-1980s that still works for an evening’s entertainment thanks to memorable performances from Hauer and Simmons (I love the scene when the former tells the latter: “you’re not a soldier – you’re just a fly on a pile of shit), and a few good one-liners. This is not a great movie by any stretch of the imagination, but it’s the best of the mid-1980s Let’s Get Those Terrorists films in my collection. 6/10 stars.