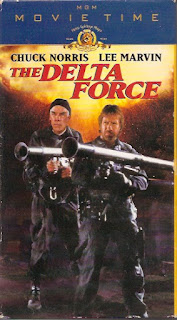 Let’s Get Those Terrorists Movie #2
Synopsis: Chuck Norris single-handedly wipes out terrorism in Beirut.
Blurb From the VHS Jacket: “When political extremists take innocent Americans hostage, only super-soldiers Chuck Norris and Lee Marvin can rescue them in this tremendously entertaining, action-packed adventure!”
What Did I Learn?: There's no geopolitical problem that Chuck Norris and a motorcycle loaded with an endless supply of rocket-propelled grenades can't solve.
You Might Like This Movie If: You don't recognize the sarcasm in my Synopsis.
Really?: 1 So wait, McCoy (Chuck Norris) resigns from Delta Force following the disastrous Desert One fiasco in 1980, several years pass, and even though they don’t contact him, everyone expects McCoy to join them on the big mission and he miraculously shows up! Gee, that’s credible…. Is somebody else now doing his job? Are they now using new equipment? Is it possible to step effortlessly into a tightly-planned commando mission? 2 Um…what does McCoy hear on the radio that gives him the impression reinforcements are coming? A fellow team member actually mentions that he doesn’t speak Arabic. 3) Um… isn’t Lee Marvin a little old to play the leader of a crack commando unit?
Rating: The Delta Force clocks in at just over two hours, but holy shit this movie drags after the first half hour or so. The biggest problem is that it often seems like two separate films stitched into one: an hour-long psychodrama of Middle Eastern terrorists pushing around innocent American airline passengers, followed by Chuck Norris karate-kicking nameless terrorists and causing endless mayhem riding around on that motorcycle I mentioned earlier! The Delta Force has an impressive cast (including Marvin, who was seriously ill when DF was shot, and doesn’t look so good), but they aren’t given much to do besides look scared, or in Shelley Winters’ case, launch into a meltdown that would likely get her killed in real life. I can’t recommend this movie. 4.5/10 stars.
https://www.imdb.com/title/tt0090927/?ref_=nv_sr_1


Would it Work for a Bad Movie Night?: Why not? Take a drink any time an actor wildly overacts, or McCoy gets annoyed by bureaucratic inaction.