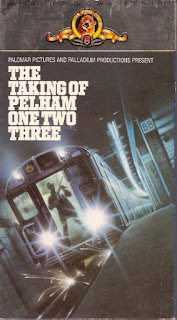 Walter Matthau Movie #9
Synopsis: Walter Matthau plays a tough New York City police detective…..no, really.
Blurb From the VHS Jacket: "The pulse-pounding excitement of The Taking of Pelham One Two Three is yours for the taking."
What Did I Learn?: 1) Even great men have to pee. 2) Apparently, it’s easy to confuse a bomb with a cantaloupe. 3) It’s difficult to run a God-damned railroad without swearing.
You Might Like This Movie If: You know you sometimes run into strange people on the subway.
Really?: 1) You know….if I had $250K strapped to my body, and a seriously limited amount of time to vamoose the scene of a crime, I’m pretty sure I would NOT stick around an extra 10 or 15 minutes to finish off a cop who just killed an accomplice I barely knew. Just sayin’. 2) I realize this film takes place in the mid-1970s, and New Yorkers had a reputation for being rude assholes, but gee – could a senior transit official tell a police lieutenant he had no intentions of going along with the official plan without getting fired, and could that cop really get away with throwing him to the ground? 3) Hold on – Garber is given a list of 78 motormen who were discharged, and he automatically eliminates 26 who “moved away?” 4) I'd love to know how Mr. Blue (Robert Shaw) met Mr. Grey (Hector Elizondo), and why in the world he hired such a psychotic lunatic.
Rating: The Taking of Pelham One Two Three is firmly rooted in mid-1970s New York City, but it’s still a crackling good thriller, and well worth viewing. Matthau and Shaw portray complex, multi-layered characters who play a superb game of cat-and-mouse when they aren’t busy dealing with idiots and psychopaths in their own camps. Oh, and I have to give Pelham an extra star for David Shire’s exceptional musical score – it really helps build necessary tension. Highly recommended. 10/10 stars.