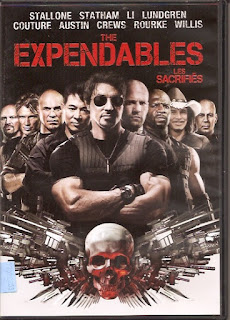 Synopsis: Mercenaries infiltrate a small tropical island claiming to be ornithologists…. So, it’s essentially The Dogs of War pumped up on a dumptruck full of steroids.
Blurb From the DVD Jacket: “Sylvester Stallone stars as the leader of The Expendables, a tight-knit team of skilled combat vets turned mercenaries.”
What Did I Learn?: 1) You don’t kill your familia. 2) The enemy has always been afraid of noise – especially shotguns. 3 )There are more fools in this world than people. 4) Emotions are the cancer of the intellect. 5) Life’s a joke.
You Might Like This Movie If: You'll gladly watch Stone Cold Steve Austin in anything.
Really?: 1) So, Gunnar (Dolph Lundgren) has a muscular physique, is obviously in good enough physical shape to participate in drawn-out martial arts fight, and we're supposed to believe he’s some sort of heroin addict? 2) Speaking of Gunnar, isn’t he basically dead when Barney and Yin Yang leave him in that abandoned factory? How does he not only do a complete physical recovery but get back into the Expendables’ good graces after attempting to kill them? 3) Why does Munroe keep Sandra as a hostage after murdering her father, General Garza? She’s useful to him only as leverage. This doesn’t make sense. 4) I’m curious – how do the Expendables somehow find themselves outside of Garza’s palace? How did they get into the country undetected? 5) Was there any reason to cast Mickey Rourke as Tool? He doesn’t really do very much. Ok, I give up…
Rating: I had high hopes for The Expendables; the movie boasts an extremely impressive cast of action movie stars, and an old buddy gave it rave reviews when he saw it a few years ago. While I liked the scene of Stallone exchanging barbs with Bruce Willis and Arnold Schwarzenegger, the film is juvenile, poorly-written, and consists mostly of explosions and menacing growls. Ok, The Expendables is an action movie, not Once Upon a Time in America – I get that, but even the action scenes are either too fast to follow what’s happening, and they’re devoid of any tension or suspense because the Expendables are pretty much indestructible, and you know that nobody is going to get hit by an accurately-aimed machine gun bullet. I cannot recommend this movie. 4/10 stars.
Would it Work For a Bad Movie Night?: Abso-fucking-lutely. Take a drink any time a conversation between two characters devolves into a series of threats and menacing stares.