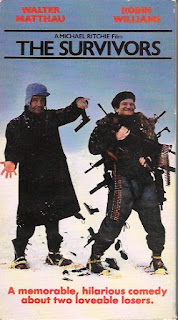 Walter Matthau Movie #8
Synopsis: Robin Williams plays a nerdy guy who loses his job and his girlfriend and basically goes off the deep end after he becomes a victim of crime…no, that’s The Fisher King. Um… Walter Matthau portrays a decent-but-slovenly New Yorker who is ultimately driven to violence by his friend’s manic insanity….no, that’s The Odd Couple. Um… ok, Jerry Reed is a loveable good ole boy who’s wanted by the law…no, that’s Smokey and the Bandit.
Blurb From the VHS Jacket: "A memorable, hilarious comedy about two loveable losers."
What Did I Learn?: 1) You’re not supposed to shoot a person’s gun.  2) Nothing in the world improved from 1973 to 1983 with the sole exception of video games. 3) No one who matters watches the five o’clock news. 4) “You’re not going to die” is something people always say to people who are about to die.
You Might Like This Movie If: You're looking for a few pointers on how to really piss off a hired killer.
Really?: 1) So….how does Jack know that Sonny is driving a cab? 2) How is Donald able to afford all of those guns and survivalist stuff without a job? How does he support himself? Sonny works odd jobs, but I also wonder how he’s able to put food on the table for him and his daughter. 3) Hold on – Jack breaks into Sonny’s home and makes it clear he’s going to kill him, yet when he and Donald deliver Jack to the cops Sonny only mentions the attempted diner robbery? That doesn’t sound credible. 4) So, Jack turns babyface at the end of the movie? He tried to kill both Donald and Sonny, and even held Sonny’s daughter at gunpoint earlier in the film! 5) How many 15-year old girls enjoy watching porn and playing video games? I’m surprised the Candice character was written as Sonny daughter rather than as a teenaged son. 6) Why is Wes so gung-ho about icing Jack? He’s a fraud who’s out to make a fast buck. Why wouldn’t he call in the local cops, or make a citizen’s arrest?
Rating: I have to give The Survivors a bit of a mixed review; the plot doesn’t make a lot of sense, and the characters make a lot of very strange decisions (see: “Really”), but Robin Williams is at the top of his game, and delivers a lot of great one-liners. Moreover, grumpy Matthau makes a great foil for Williams (I love the scene when Sonny uses a bit of coercion to convince a helpless Donald to take Jack’s deal), while Reed is great as a strangely sympathetic villain. The Survivors is a fun (if somewhat dated) romp if you turn off your brain’s critical thinking skills and enjoy the laughs. 7/10 stars.