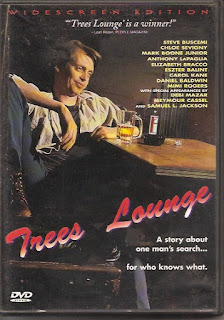 Please click the link to read my review of the similarly-themed Barfly
Synopsis: Luckless, Likeable lallygagging lounge-lizard lush loser loves liquor, looks languished, louses livelihood.
Blurb From the DVD Jacket: "All Tommy wants from life is what everyone has - a job, a girl and a good time. But the harder he tries, the worse things get."
What Did I Learn?: Everybody's fucked up, but nobody wants anybody else to think they are, but everybody knows they are anyway. 2 It’s easy to confuse Marlon Brando with Jerry Lewis.
You Might Like This Movie If: You're in the mood to meet some colourful characters and take in some stimulating conversation.
Really?: Ok, Trees Lounge is a total hole-in-the-wall dump that hasn’t been renovated (or cleaned) in the previous 40 years, but I had a hard time believing a juke box in 1996 would be loaded up with the Ink Spots and an entirely pre-rock ‘n roll musical lineup. 2 So, does Tommy have any actual talent as an auto mechanic? This is never made clear – he can’t seem to fix his own early-1970s lead sled, but he’s also drunk most of the time. I also wondered if Tommy was telling the truth about not being able to get a reference from Rob or if he was just making a bullshit excuse.
Rating:Trees Lounge is a slow-moving, but heartfelt and surprisingly compelling character-driven seriocomic look at a 30-something guy who really needs to get his shit together and stop hanging out in America’s crappiest dive bar. Buscemi (who also wrote the screenplay and directed) is strangely sympathetic as Tommy, even when the character is obnoxious and self-destructive, which is most of the movie. It’s fun to watch Tommy get into trouble and exchange some very funny barbs with a slew of actors who later found fame on The Sopranos, but there’s a serious message about alcohol abuse behind the laughter. Highly recommended. 9/10 stars.