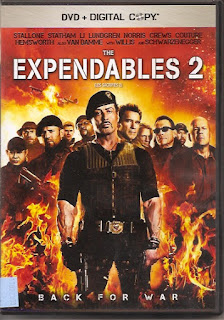 Synopsis: Planet Hollywood’s senior management take time out of their busy schedule to film themselves firing off some automatic weapons.
Blurb From the DVD Jacket: “THE EXPENDABLES ARE BACK in a sequel that J. Rentilly of menshealth.com calls ‘a high-octane adventure with non-stop action!’”
What Did I Learn?: 1) Sometimes, it’s fun to run with the pack.  2) Respect is everything. Without respect, we’re just people. Common, shitty people. 2) a Respect….must be taught.
You Might Like This Movie If: You know that fighting a tank isn't easy.
Really?: 1) Why in the world does Vilain (Jean-Claude Van Damme) murder Billy but leave the rest of the Expendables alive and kicking? They dropped their weapons – he could order his men to blast them with machine gun bullets and there wouldn't be any witnesses. 2) That reminds me – why does Vilain order his men to machine-gun the villagers when he’s planning to blow the mine to smithereens, anyway? 3) So, Barney’s big plan to enter the heavily-guarded mine is to fly his plane inside and purposely crash-land? 4) Alright, that’s enough….
Rating: The Expendables II is a somewhat better film than the original – this one at least has some tension, Van Damme is great as the thoroughly evil Vilain, and it never takes itself too seriously, but it’s still a not-terribly believable adventure film featuring cartoonish violence and nearly-indestructible heroes. 6/10 stars.