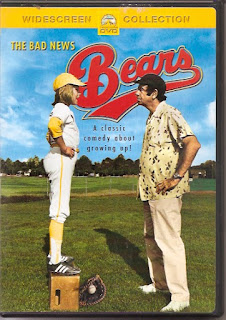 Synopsis: Oscar Madison exchanges barbs with foul-mouthed, surly pre-teens.
Blurb From the DVD Jacket: “A major surprise as one of 1976’s top-grossing films, The Bad News Bears is a movie about children that is refreshing, utterly believable, and quite cleverly funny.”
What Did I Learn?: 1) That quitting thing - it’s a hard habit to break once you start. 2) It took several hundred years to build Rome. 3) There’s energy in chocolate. 4) The Yankees are real turds. 5) Nobody wants to wear a jockstrap until some unlucky sap gets smacked in the nuts with a fastball.
You Might Like This Movie If: You know that bears are bad news.
Really?: 1) So, Buttermaker (Walter Matthau) transforms from an apathetic, beer-drinking slob into a verbally-abusing control freak? And then into a genuinely caring father-figure in the last 15 minutes of the movie? 2) I wouldn’t describe myself as a fan of political correctness, but it is a bit jarring to hear an 11-year old spout racial epithets at his teammates. 3) Wait, Buttermaker informs ace pitcher Amanda (Tatum O’Neal) that he doesn’t want to see her again once the season is over, and she shows up for the last game, anyway? 4) I’m glad the Bears learned all about the importance of teamwork, but how about manners and good sportsmanship? 5) So, it’s the final game of the season, the Bears have a real chance of winning, and Buttermaker puts in his worst player because he hasn’t had a turn at bat? Oh, come on….
Rating: I hadn’t watched The Bad News Bears in nearly 35 years, so I was surprised to discover that it wasn't quite as funny as I remembered. Matthau does his best with the material - he shares some nice one-on-one moments with O’Neal and a few of the other kids, and I loved the scene when he orders the team to clean a swimming pool as he sips martinis, but the script is often vulgar and clichéd, Matthau’s character development is a little unconvincing (see: “Really?”), and nobody in this film is all that likeable. 6/10 stars.