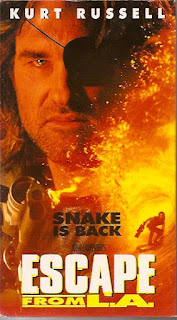 Synopsis: It’s the most derivative, badly-produced, and completely unnecessary rip-off of Escape From New York since…well, After the Fall of New York.
Blurb From the VHS Jacket: “The man with the patch is back. Call him Snake. Kurt Russell rejoins filmmakers John Carpenter and Debra Hill to do to the Big Orange what they did to the Big Apple in Escape From New York - with even more futuristic thrills and slam-bang action!”
What Did I Learn?: 1) L.A. can kill anyone. 2) L.A. loves a winner.
You Might Like This Movie If: You'll watch Kurt Russell in anything.
Really?: 1) So….nobody has ever survived Cuervo Jones’ basketball challenge until Snake shows up. Oh, and who would have guessed he also knows how to surf a tsunami-sized wave? 2) Wait, Cuervo Jones, the leader of the world’s anti-American forces, is living (and thriving) inside an offshore American prison? 3) I realize Snake is slowly dying from the Plutoxin virus, but I’m pretty sure that if I were piloting a submarine, and somebody informed me I could blow out the engine by pushing it too hard, and too fast, I would probably slow down. 4) So, are China and the Soviet Union still around, as they were in the alternate 1997? Why is it now the United States against the rest of the world? This is never really explained. Also, the narration claims that a presidential candidate predicted a giant California earthquake, and then it happened. Was it planned? Do we care?
Rating: Escape From L.A. isn’t really a sequel to the classic Escape From New York so much as a pointless remake, featuring a collection of characters very similar to the ones in the original, and nearly-identical scene-by-scene story plotting. Unfortunately, the film also features laughably bad early CGI special effects, and an over-the-top satirical streak (ex. The Surgeon General of Beverly Hills and his gang of plastic surgery-addicted goons) that never delivers any laughs. A prime example: it’s funny in EFNY when prisoners about to be shipped to Manhattan are informed they can choose to be executed; it’s crude and disturbing in EFLA when we witness electrocutions in the hallway of the processing centre. I cannot recommend this movie. 4/10 stars.
Would it Work For a Bad Movie Night?: Absolutely - take a drink every time Malloy (Stacy Keach) addresses Snake as “hotshot.”