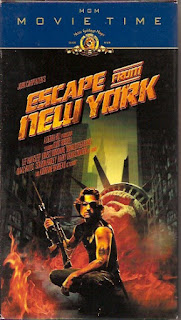 Synopsis: Sometime in the future, the US Government decides to dump It’s convicts into a lawless offshore hellhole terrorized by a ruthless crime lord. So, it’s basically Terminal Island, with the added feature of Kurt Russell growling out a Clint Eastwood impression.
Blurb From the VHS Jacket: “Kurt Russell (Stargate) stars in a high-velocity sci-fi action-thriller that sets the screen ablaze with heart-stopping suspense, outrageous stunts and imaginative special effects.”
What Did I Learn?: The Duke of New York is A-Number-1.
You Might Like This Movie If: You know that originality went out the window in Hollywood a long time ago.
Really?: 1) The movie opens by stating that in 1988, the crime rate spiked by 400%. Um….why did this happen? And why would the US government turn its financial capital city - with an extensive subway network and other expensive infrastructure - into an island prison? 2) So, the President has the only copy of a plan for nuclear fusion? Gee, that’s convenient. 3) Um….there appears to be an oil derrick in Brain’s apartment. Does New York City sit atop some undiscovered petroleum deposit? How exactly does he “make” gasoline for the Duke? 4) Hold on - Snake defeats Slag (Ox Baker) in a death match, the Duke and his entourage suddenly leave to catch the traitorous Brain, and Snake is more-or-less abandoned by his captors?
Rating: Escape From New York is an enjoyable science-fiction-action-thriller with an odd-but-impressive cast that works well as long as you don’t ask too many questions about the plot. Russell has said that Snake Plissken is his favourite character, and it’s easy to see why - he’s pretty fucking cool. 8/10 stars.